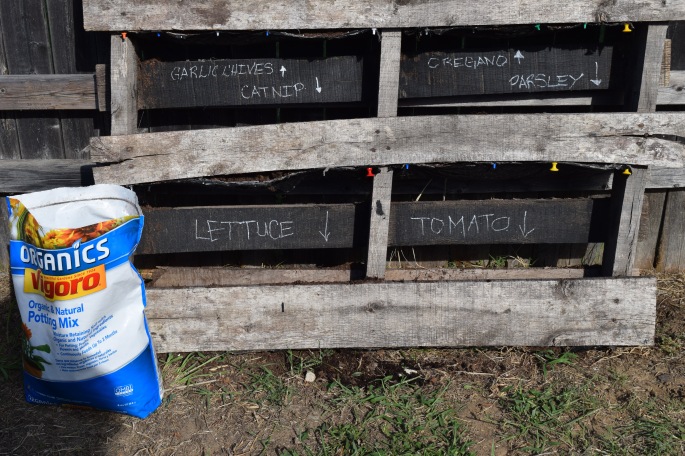 The do it yourself pallet planter is a fun, easy and low-budget project that you can do with your seeds. First you will need a pallet, you can find these on the side of the road like we did, on construction sites, or grocery stores. They are always free just ask permission if you are getting them from a store or construction site to make absolutely sure.  Once you have your pallet take garden cloth or plastic garden cover, and tack it into place on the boards that are parallel. ( this will give your youngsters a chance to use a hammer and “nail” techniques if they are not already familiar) Once you do this you can reinforce with burlap, because once you put the dirt in, it will be a little heavy. So make sure you pull your cloth or plastic very tight. (we had to go back and reinforce our’s.)

The next step is to paint the exposed boards with chalk board paint. (*Tip-You can purchase a small bottle that will last for most projects for approximately three dollars at Hobby Lobby.) Once the paint dries you can write what you are planting so that as the seeds grow you will not forget what plant is there. We used all organic seeds and Vigoro potting mix to plant them in, as shown above. It has taken us  three weeks to get sprouts of the tomato, parsley and four weeks for small sprigs of lettuce and oregano. Still have not gotten our chives or catnip to sprout, but Kingston talks to them daily. So please comment if you try out our pallet planter and let us know how your plants are doing. My sons have been so excited to see it work and we can’t wait to utilize our herbs and veggies from our planter!

The Extended Fellas Family took a trip to Frisco Fire Safety Town to learn the ropes about fire safety. We learned to cross the street safely, where you NEVER play and how to escape a burning house from the second story. We also learned about the tools Firefighters use to rescue people from cars and homes after fires and accidents. Given that October is Fire Safety Month, we used this trip as a started to our conversation about Fire Safety in the home. 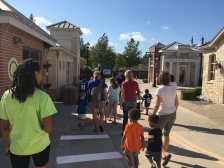 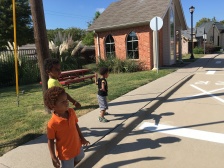 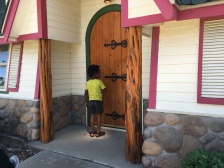 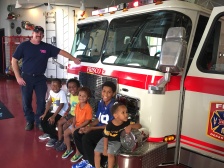 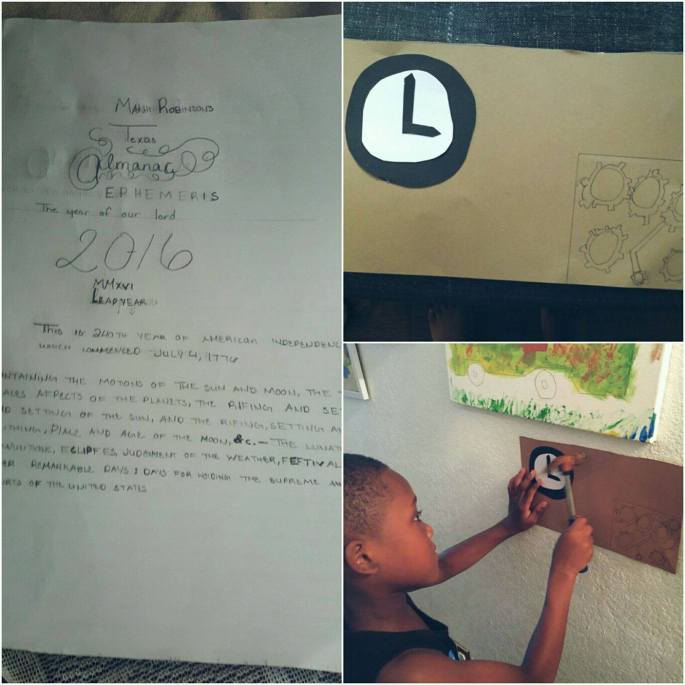 I am always looking for ways to inspire my young Kings, so I purchased Black Pioneers of Science and Invention by Louis Haber. Originally I brought the book for my middle schooler, but decided that I would share the knowledge with both of them. The book starts with Benjamin Banneker scientist, astronomer, mathematician, clock maker, and surveyor. What we enjoyed most about the story is that he was self-taught, in a time where melanated people were not allowed to be educated, nor seen as naturally intelligent people. This not only gave them perspective on how important being educated back in the 1700’s was, but it also gave them insight into the mind of someone who persevered beyond barriers just on interest alone.

Once we finished our chapter I challenged them to create something as Benjamin Banneker had done. My twelve year old decided to produce an almanac, which took a great deal of time. ( and he was just copying information) In doing this he gained a sense of the time in took Banneker to construct such a detailed almanac and why it was so appreciated at the time. He also gained understanding on how farmers could use the almanac to know when the best time was to plant and harvest. For my seven year old we recreated a flat card stock clock creation, similar to the creation of Banneker’s wooden clock. This invoked thought on how our modern clocks have changed and how they operate.

I feel as a parent it is very important to share these stories in hopes of boosting a thirst for knowledge. In a traditional school setting many important Africans and native “black” americans are written out of history. Especially those that have been way makers ( the scientist and inventors) It is extremely important for us to share these stories with our seeds, so that they are encouraged to think outside the norm. I highly recommend this book and will be sharing one chapter a week with my young Kings to continue to spark the excitement of science and education.

I met Tanekeya on the campus of Howard University. (HU! YOU KNOW!) Back then, I was a chubby faced teen who would walk across the yard and hear “Chipmuuuunk!” There was only one person in the world that called me “Chipmunk” and that was Tanekeya. Hearing it always made me blush and smile. I blushed because I didn’t want others to hear and start calling me that (LOL) but I smiled because I knew I was about to be blessed with a big hug and a GREAT conversation. Tanekeya was and is kind, creative, BEAUTIFUL (see above photo), strong, BRILLIANT, and inspiring. I loved talking with and working with her on Power Hall or simply walking the campus. Never one to talk or think in small ideas, Tanekeya was and is always genuine, encouraging and so unflinchingly positive. It was for all of these amazing virtues that I never minded being called Chipmunk or Gizmo* but saw it as a blessing that someone as amazing as she was my friend. (*I had a thing for wearing my hair in a bun)

Fast forward to 2016-We are both Mothers to Black Boys and it places us in a sensitive space. Tanekeya is a Contemporary Visual Artist, an AOP Fellow and Doctoral Candidate in Urban Education at The University of Wisconsin Milwaukee and, as she accurately puts it, “made of intergalactic afro dust”. Like Alexis, Tanekeya will inspire you, empower you and awaken you. All this Magic is contagious, MilkBrain Moms and Dads!! Besides MilkBrain, find out about Tanekeya’s work at http://www.tanekeyaword.com/